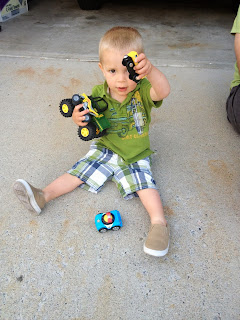 I am a firm believer that the best type of learning is the kind that occurs unintentionally through a child's curiosity.  No worksheets.  No lesson plans.  No planned learning time.  Just spontaneous learning through play. 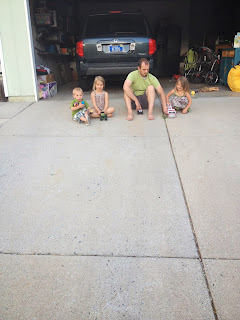 A few weeks ago, we were all in the front of the house while Ben washed the car or mowed the lawn or something.  I can't remember.  Aaron (2) picked up a car and pushed it down the driveway.  When he saw how it swerved as it ran down the hill, he looked up at me with giddy eyes.  He quickly ran to get the car and did it again.  And again.  And again.  Soon he asked if he could go inside to get more.  He came out with an armful of different cars and trucks. 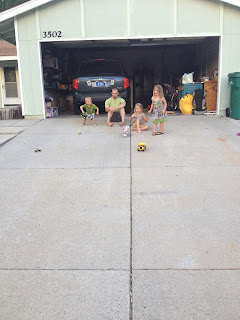 The girls quickly joined him.  They soon figured out that certain cars went straighter than others.  Some were faster.  Some didn't go very far at all.  Some needed a big push, others picked up speed on their own.  Some would make unexpected turns.  Some went perfectly straight. 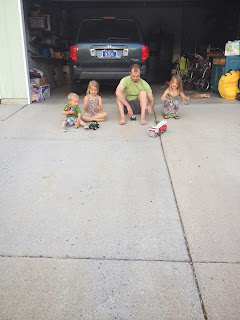 I stood at the end of the driveway to block cars and squealing children from the street.  The kids had races and bet on which cars would win.  They started wondering why certain cars were faster or drove straighter than others, and they came up with a wide assortment of answers!  Maybe it's faster because it's bigger or heavier.  Maybe this one goes straighter because it's wheels don't move.  Maybe this one gets over the cracks because it has big, soft wheels instead of hard, small ones.

A) I did nothing but cheer them on and allow their spontaneous play to happen.
B) The kids had no idea they were learning, just that they were having fun.

What would happen if we allowed these moments to happen more often?  If we stopped rushing to get inside or move onto the next thing and allowed our children to experiment and explore and speculate?  I want to slow down and make sure to provide and capitalize on these types of situations.  I want more of these moments for my children as they learn and grow.  To me, this type of learning is way better than worksheets!
Posted by Mothering with Creativity at 1:43 PM