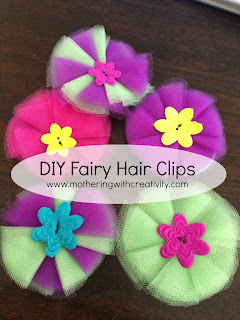 If you've been around this blog for any amount of time, you know that I love to give my kids birthday parties despite my often very small budget!  I usually aim to do everything for under $100.  Thus far, I believe that my money has gone the furthest for Zoe's Tinkerbell party (in terms of the amount of things I've been able to do for the kids).  Since I've done so many projects for this party, I am breaking it up into 2 posts.  This post contains the tutorials for the fairy wands, hair pieces, and Peter Pan hats. 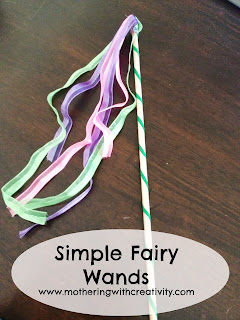 These fairy wands were super simple to make.  I bought a package of 12" wooden dowels as well as a few spools of ribbon from Walmart for a total of $4.82.  I already had hot glue at home, but if you don't already have some, you'll need to pick some of that up (check your local Dollar Stores first as that's where I bought my glue gun and glue sticks). I also used some homemade mod podge for this project (basically watered down Elmer's glue). 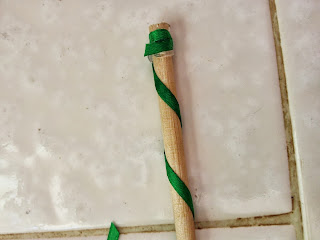 Place a drop of hot glue at the base of a dowel.  Attach the end of a piece of ribbon.  Wrap the ribbon around the dowel until you reach the top.  Cut the ribbon and attach to the end with another dot of hot glue.  I then used a paintbrush to paint glue over the entire dowel/ribbon surface to ensure that the ribbon would stay in place. 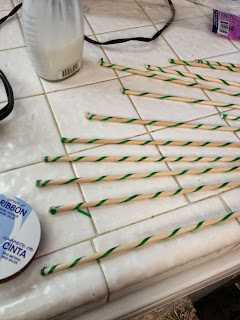 Now, cut various sizes of ribbons.  Attach them one at a time by placing hot glue on the dowel and wrapping the ribbon around (fold the ribbon in half around the dowel so there are 2 ribbons hanging once glued).

Allow to fully dry before handing them to your princess or fairy! 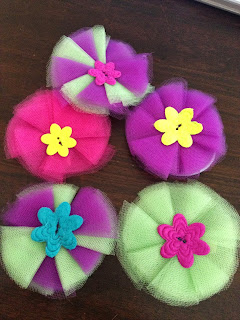 These hair pieces turned out so stinking cute!  You do need to use a sewing machine for this project, but it only requires minimal skill, so don't be scared!  (Though, really, it would be possible to hand stitch this project, it would just take a little more time.)

I bought a set of 5 hair clips at Walmart in the fabric/craft section.  They are plain so you can create whatever you want on them.  I then found 6 hair ties from around the house that were in great condition.  So, for this project, I made both hair clips and hair ties.  I also bought tulle from Walmart.  I bought 2 spools ($3 each, shared with another project), and 1 yard of tulle for $.98.  You will also need some hot glue and a small amount of felt for this project.  I already had both on hand. 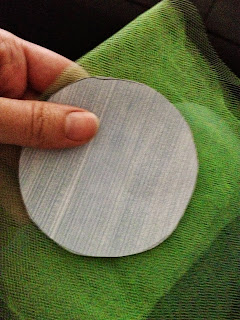 First, cut out a 3" circle on paper or cardboard.  Use it as a template for your tulle.  I used between 21-24 circles per hair piece.  Layer the tulle so you can cut out a whole bunch of circles at once.

After cutting out plenty of circles, cut out 1" circles from felt, any color.  You will need 2 felt circles per hair piece. 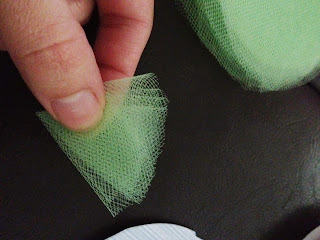 Stack 3 pieces on top of each other, and then triple fold them into a pie shape like above. 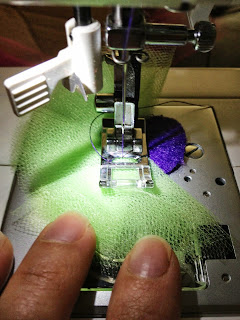 Using those pie shapes, make a few stitches to attach them to your small felt circle.  I found it easiest to fold a set, sew it on, fold another, sew it on, and so forth around the hole felt circle. 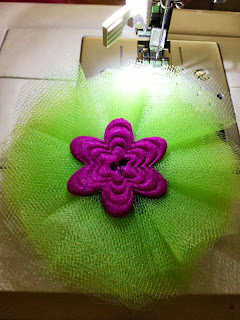 Once you've sewed your tulle "pie" pieces to the felt, flip it over.  Attach something pretty on top.  I bought these felt flower button pieces to attach (also from Walmart).  Sew it on right in the middle. 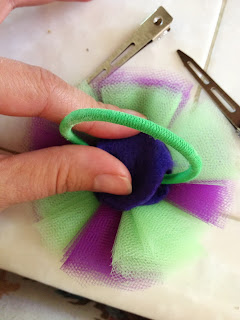 Now you'll be flipping that hair piece back over to the felt side.  You are going to be attaching your hair clip or tie to this side using hot glue, and then covering it completely by hot gluing another felt circle on top to enclose it.  You can do this all in one step.  Just cover it with hot glue, position the clip or tie, and press the other felt piece on top.  When using clips, be sure to open the clip to face the correct way when worn, and to not get hot glue all over both sides! 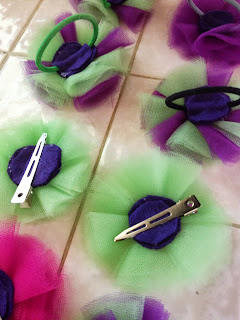 Here they are drying ^^^  You can mix and match colors, or do all solids.  Also, you can do this with materials other than tulle.  I actually got the idea for these from some fabric clips my sister in law made for my girls last Christmas.

Walmart happened to sell felt by the yard for just $3.97.  Since I already had red felt at home to create feathers, this project only cost me the $3.97...for 11 hats!  I found the template for these hats HERE.  Begin by printing out the template.  Because this gal has a full tutorial for her hats, I'm not going to repeat it here.  To see this gal's tutorial, go HERE.  The only big difference between how I put mine together and how she did hers is that I intend the folded end to be in front, and it looks like (by the way she positioned her feathers) that she has that as the back of the hat.  Maybe I'm wrong, but you can make yours to be worn whatever way you'd like! 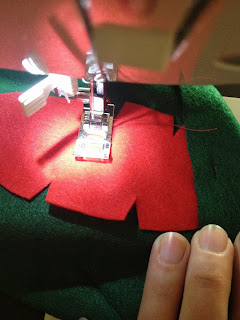 I also did a small stitch about half way up the feather so that it would stay up better.  I DID NOT use pipe cleaners like she did, but the stitching helps it stay up just fine.  Also, I added a small stitch to the brim on the other side of the hat, too, to keep the fold in place perfectly. 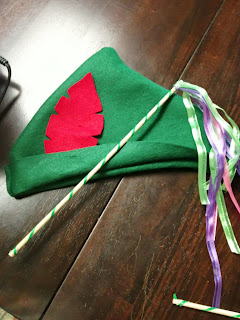 Part 2 will include the rest of the party, including the "paint a fairy house" sign and set-up, the "walk the plank" game, the cake, food, fairy glitter recipe, fairy dress up station, birthday name sign, and party decor.  Keep your eyes peeled for it!

Posted by Mothering with Creativity at 2:41 PM