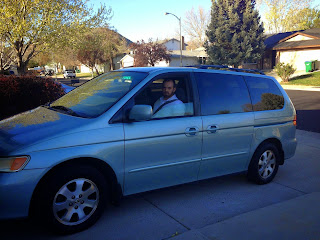 Two years ago, we sold our second car to pay for the birth of our fourth child, Levi.  I'm a stay at home, homeschooling mom, and my husband works just a couple minutes away from our house.  A second car wasn't a complete necessity, and it was fairly easy to make the decision to sell the car.  We don't like debt, and we try to pay cash for everything and anything.

Fast forward about 2 years, and we now have 4 children who are a bit more active.  We have lessons and co ops and playdates and errands to run during the week days.  And while dropping Ben off at work in the morning and picking him up in the evening isn't terrible, it can sometimes be a hassle when scheduling other things around those times.  Additionally, Ben has been performing quite a few more weddings, which means he often has weeknight meet ups or weekend rehearsals and weddings. I also have my Kindermusik business, which is primarily on weekends, too.  Basically, it was just getting too difficult to be a one car family with 4 kids and our schedules.

In January we started actively saving for a new car.  My initial goal was $3000.  I figured we could at least get a decent car for that much.  We saved all our extra income and by April, we had about $4000 for a car.  Ben searched high and low for a VW Squareback or Bug.  They were just too far out of our budget.  And then one day, unintentionally, he found a minivan.  Say what?  I've always had a hate-hate relationship with mini vans.  They're ugly.  They certainly aren't "cool", and they just were not made for me.  I like Suburbans.  Big SUV's.

The more I thought about it, the more I liked it.  So we went and met up with the guy, checked it out, drove it, and bought it!  We got the car for $4000.  It's fantastic!  I may be falling in love with it...just a bit.  It's spacious and fits our family well.  And, I'm super proud of my husband for choosing something for practical for our family, even though what he really wanted was a Squareback (maybe someday?).

So now we're a two car family, which means I can do whatever I want...except nothing because I spent all our money on a new car.  Sigh.

On another note, did you know you're supposed to have a moving permit, even if you buy from a private party?  The kind police officer was nice enough to let me know this little tid-bit and let me off with a warning.

Since I didn't publish this post right away, I am updating this now, before I do publish it.  Last night our new minivan left us stranded at bedtime with all 4 kids.  It wouldn't jump.  Lights all worked.  Lame.  We have wonderful friends who came and got Ben so he could come home and get our other car, and we had to get the van towed.  TOWED!  And, because it only had a temporary insurance number, we had to pay out of pocket (which is actually reimbursed by our insurance agent-yay!).

Fast forward to this morning.  Ben checks in with the car shop, and they think maybe the main computer or whatever is bad, which is not promising.  But in the end, they said it looked like the starter had been recently replaced and had fallen loose.  They tightened it for us, and now the car works!  Not only that, but they waved the $150 fee that was to accompany the inspection.  They did it totally for free.  Amazing!  I'm so thankful for two working cars!
Posted by Mothering with Creativity at 1:06 PM