How to Bake a Pumpkin 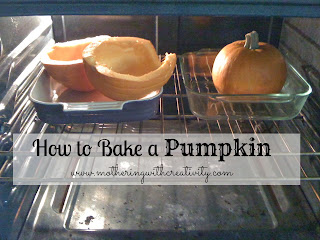 I mentioned a few days ago that I had baked a pumpkin for fresh pumpkin puree.  I've had quite a few people ask how to do this, and so yesterday I took some pictures while I baked another two pumpkins.  Here's how to do it!  I used pie pumpkins.


I baked both pumpkins for 1 hour at 400 degrees F.  You will know they are done when you can poke a fork into the flesh easily.  Remove them from the oven and allow them to cool until you can handle them.  Special Note:  The two pumpkins pictured here were a little bit different in size and were purchased at different stores.  This may account for some of their differences.

Once it is cooled off enough, the skin should pull right off of the pumpkin on the left (sliced in half pumpkin).  The skin on the whole pumpkin had turned darker in color, but was pretty hard to the touch still.  Cut the top of the whole pumpkin off.  This one was a little trickier, because you will want to scoop out the seeds and bright orange strings from the inside, without scooping out the good flesh with it (you'll notice there is some difference in color-that will help you scoop out the stuff properly). Now remove the good flesh into a separate bowl.  You can just use a spoon and scoop it out of the hole in the top.  Here is mine: 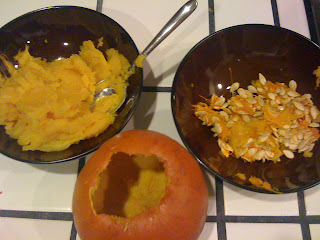 Now, knowing that these are two different pumpkins, I actually preferred the finished texture of the whole baked pumpkin to the sliced pumpkin.

Next, if you want it to be pureed, you can throw it into a food processor or blender.  You may need to add a little bit of water if you need to thin the texture a bit.  Bag, label, and freeze or refrigerate your finished product.  I used one pumpkin for baby food and the other for two bags of puree for baking and such.  (I used my Beaba Babycook to make both purees-the baby food had more water added to it so it would be thinner). 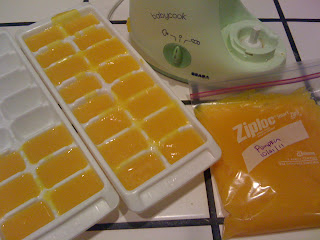 For $.79x2 ($1.58), I made 2 bags of organic pumpkin puree, baked pumpkin seeds for snacking, and made approximately 20 ounces of organic pumpkin baby food.  Talk about frugal!  A can of pumpkin at the store runs about $2-$2.50, a bag of pumpkin seeds are about $1, and 4 ounces of baby food can run anywhere from $.65-$.80, depending on brand.  Between all these things, I saved at least $6-7!  And it was easy, and it tastes so much better!  My kids have also discovered that they enjoy eating pumpkin seeds!
Posted by Mothering with Creativity at 7:46 AM