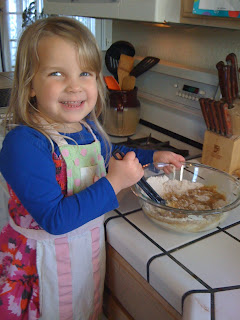 Yesterday, Ellie and I tried out some homemade graham crackers.  Oh my goodness, they are so good!  Both of my girls gobbled them up.  With Nutella on top?  Even better!  I did a modified version of this recipe HERE (modified primarily because I ran out of a few ingredients-gasp!).  Here's how to do it:

Preheat oven to 350 F.
In a bowl, mix together
In a separate bowl, melt 1/2 cup butter.  Then, mix in:
Stir well.  Then pour butter mixture into flour mixture.  Stir until well combined.  Line a large cookie sheet (I used a baker's half-sheet) with parchment paper.  Cut another sheet of parchment the same size.  Roll dough into a ball and place on the parchment-lined cookie sheet.  Place the other parchment sheet on top (like a sandwich).  Use a rolling pin to roll out the dough between the two sheets of parchment.  Roll it out evenly.  Remove the top sheet of parchment, and use a knife to cut 2x2 inch pieces of crackers.  We tried to do a few snowflake cookie cutter shapes, but they did not come out.  I suggest sticking with a regular "graham cracker" shape. 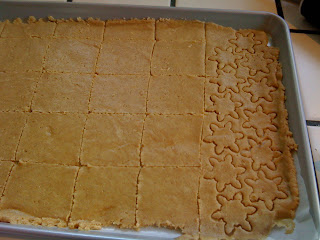 Put them into the oven and bake for 18 minutes.  Turn the oven off and let them sit in the oven for another 30 to get crispy.  Pull them out of the oven, re-cut or break out your squares and move them to a plate to finish cooling.  They will harden all the way as they cool...mine were a little soft when they first came out, but don't worry, they really do harden!

Store in an airtight container.  You can make these into chocolate graham crackers by adding 1/3 cup cocoa to the recipe.  You could also sprinkle the tops of these with cinnamon and sugar before baking!  Enjoy!

Posted by Mothering with Creativity at 3:39 PM