Our little Zoe-bug turned 3 earlier this month.  Because we call her "bug" we did a ladybug theme this year for her birthday.  Here are some of the decorative highlights of the ladybug themed birthday: 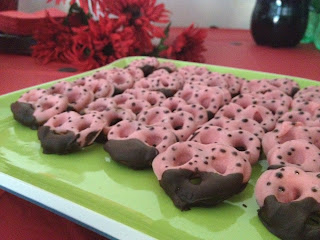 I added red food coloring to white candy melts and then dipped pretzels in the mixture.  I allowed them to dry on parchment before dipping the tip of the pretzels in melted chocolate.  I used black gel in a tube to dot spots on them.  They were tasty, and were the first thing to disappear! 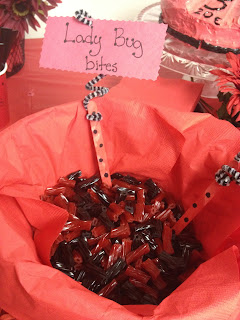 I bought black and red licorice from the Dollar Store, cut them into little pieces, and labeled them "lady bug bites".  The labels were made of red popsicle sticks with black dots drawn with sharpie, and then a black & white pipe cleaner twirled around. 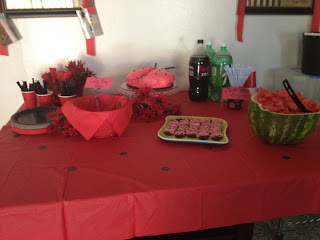 A red tablecloth from the Dollar Store was made complete with a black dots made from a large hole punch. 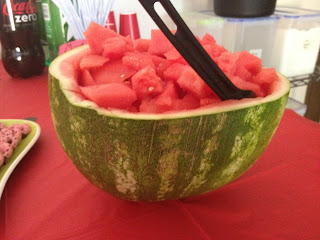 A watermelon cut in half and scooped clean makes a perfect bowl for all that watermelon!  Yum! 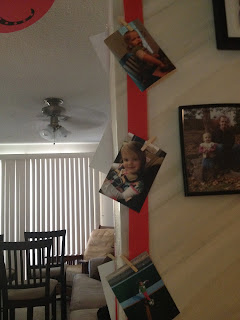 I hung pictures of Zoe from birth to age three around the room using streamers and mini clothespins. 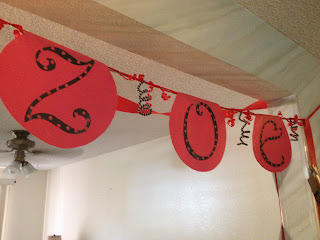 I used red and black construction paper to make a banner of Zoe's name.  I used yarn to string it, and then curling ribbon and twirled pipe cleaners to fancy it up a bit. 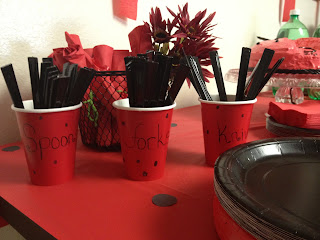 I bought red cups at the Dollar Store and used my handy-dandy sharpie to draw polka dots and label the cups for Dollar Store forks, spoons, and knives. 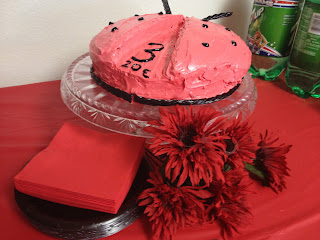 Here's the cake.  I cut a layer of the top of the cake off, and then cut that piece in half.  Then I put them back on top to look like wings.  The wings were too difficult for a cake (I've done it on cupcakes before with ease).  I would probably just cut out the inside wing portion if I had to do it again.  I then frosted it, added black spots with gel, and added licorice for the antennae. 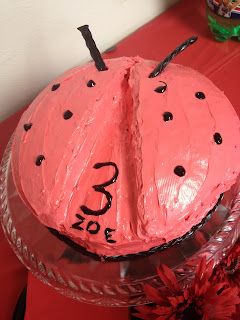 I also bought Dollar Store flowers to decorate the table.  The Dollar Store is very much my party-planning best friend, if you couldn't already tell.

Zoe had a great day, which is what was important!  So excited to see what the next year holds for our little Zoe.
Posted by Mothering with Creativity at 8:29 PM