Getting There On Time: Tips for Arriving on Time, Even with Littles in Tow 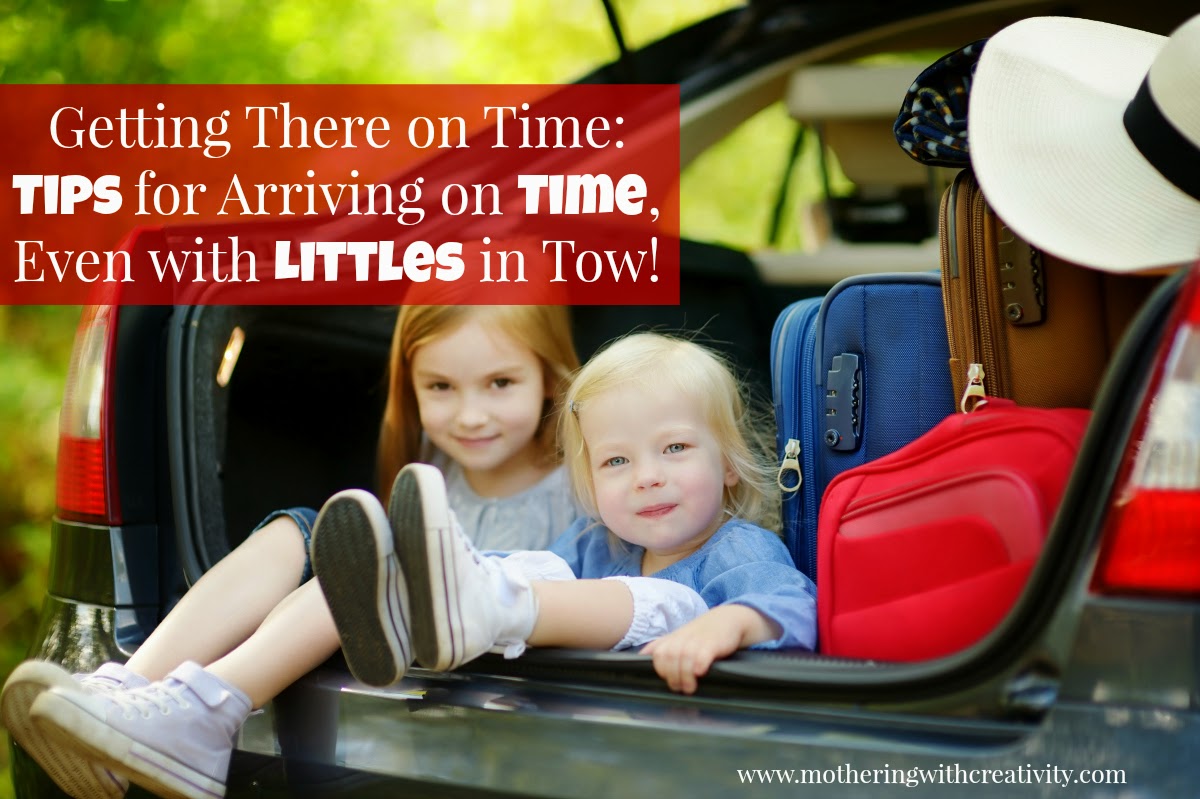 Being "on time" is something that my husband and I have always strived for.  We've both always felt that being late is quite rude, and so we've always done our best to be on time for any appointments, engagements, or meetings that we may have.  This was very easy to do when we were first married, but as we've added children to our family (four of them, to be exact!), we've discovered that being on time can be a little bit more difficult (like when you load all four kids into the car and the two oldest realize "oh yeah, I do have to go to the bathroom", the third one forgot his shoes, and the little one has a blow out).  But it is STILL very possible and doable (and in my opinion, reasonable) to be on time!  What I've noticed with my "late" friends is that they don't necessarily like to be late, they just don't know how to be on time.  That is how I felt after having kids!

Learning to be "on time" with children was quite a process for us.  Here are some of my tips for creating a healthy (i.e. not screaming at everyone to get in the car) and efficient way to get out of the house and be where you need to be "on time":

1. Time Yourself
I began by simply watching the clock.  I'd peek at it the moment I said "we need to go", again when I had everyone in the car and was pulling out of the driveway, and again when we arrived at our destination.  After doing this just a handful of times, I learned that it didn't take me "just 15 minutes" to get to wherever, like I had always assumed.  It actually took me 30-35 minutes from start to finish!  That's a big difference!  I call the time it takes from "let's go" to pulling out of the driveway my "load time".  What is your load time?

2.  Prepare "Stuff" Ahead of Time
Let's face it, when you have three kids under age 3 (as I once did), or even when they're bigger and you have 4 kids under 7, you have to carry around a lot of stuff when you leave the house!  I can't tell you the number of times I've run back into the house for a sippy, blanket, binky, extra diapers, piano lesson book, water bottles, or an afternoon snack left on the counter. And that's just their stuff!  Never mind my stuff!

The best bet is to pack a bag ahead of time.  If I know I have to be out of the house early in the morning, I will pack a bag the night before and put it in the car.  Then, I really just have to worry about getting children loaded up.  If I know I'm going to need certain supplies for a class I'm teaching the next day, I'll set all my stuff aside together, or even just load it up in the car, the night before.  This saves me chaos when trying to get out the door, extra trips back home to get the "forgotten stuff", or simply my sanity when shuffling 4 people out the door.

3. Give Yourself Adequate "Load" Time
Once I figured out how long it actually took me to load up and get somewhere, I began to give myself at least that much time.  It was hard at first, because it seemed like I was loading the car or bringing kids out really "early."  In reality, I was just finally allowing myself the time I really needed to get somewhere without stress.

Since my load time is about 10-15 minutes now, I announce to everyone that we're leaving about 15 minutes ahead of when we have to be pulling out of the driveway.  If diapers need to be changed, last minute potty breaks, or missing shoes are an issue, we have plenty of time to still load everyone in the car and get to where we need to go on time.

4.  Leave Some Margin
Once I mastered getting out the door and to my destination on time, I began to give myself another 5-10 minutes of margin (I know, it seems like this is adding up to a crazy amount of time).  This provides room for those times when a child had an accident as we walked out the door, or when I need to stop for gas.  It ensures that I can care for my family's needs without being in a hurry or ending up late (or yelling at everyone).  And, if nothing popped up, there's never anything wrong with being  a few minutes early!


If being on time is something that you find important (and I'll just give my two cents and say that it should be important), giving yourself margin, preparing things ahead of time, and giving yourself plenty of time to get places is so critical.

Now that I've established a healthy "leaving" routine, we are rarely, if ever, late.  There are, of course, still times where we end up rushing out the door or end up a few minutes late somewhere, but they are few and far between!

Do you find it difficult to get out of the house?  Do you find that you are constantly 5-10 minutes (or more) late?  Do you find yourself stressed or yelling at your children "we've gotta go now!"?  Maybe it's time for you to create some changes in your leaving routine!  Figure out your load time...I bet you'll be surprised at how much longer it actually takes you than you currently believe it to be.

Finally, allow yourself grace as you learn a new routine.  It won't be perfect.  But with time, you'll be able to master a routine that helps you get out of the house on time!