A Lump, a Surgery, a Phone Call, and Trusting Jesus 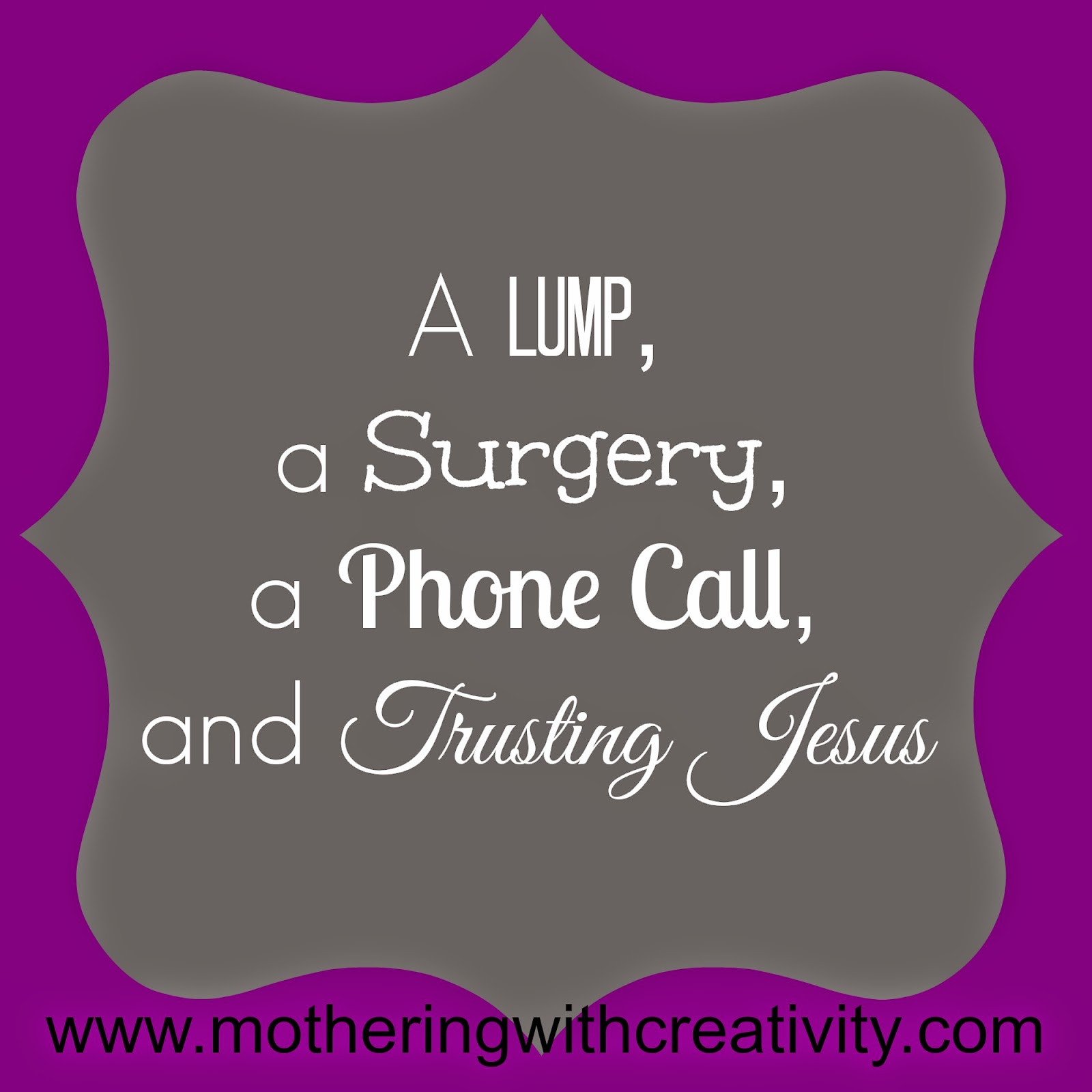 A couple months ago, Ben found a lump in his throat.  It felt kinda like a lymph node, but wasn't going away.  A trip to the doctor yielded antibiotics.  He finished the antibiotics, and thought that the lump had gone down in size a bit.

Several weeks later, he still had a persistent lump in his throat that would not go away, except now it was starting to bother him.  I noticed him subconsciously grabbed at it or moving it around all throughout the day...every day.  So he went to an ENT doctor, who ordered an ultrasound.

The ultrasound was not as cool as one might expect.  There was no cute baby in there.  So there's that.    But after a few minutes, the tech called in a doctor who called in another doctor who called another doctor up on the phone.  Ben was trying exceptionally hard not to vomit at this point.  None of the doctors could figure out what it was.  So a CT scan was ordered next.

This was uneventful, and we got preliminary results within a few days (which basically consisted of "we have no idea what it is").  Next was a surgery to remove it.

Ben had surgery on Thursday.  It went well, and he's healing up nicely.  He'll have a cool little scar on his neck someday.  Well, maybe.  He does tend to wear a sweet beard these days which will mostly cover it up.  He's still quite tired and gets nauseous easily, but he actually ventured out to Costco with me today (he said it sucked).  We should hear preliminary results tomorrow.  He also plans to head back to work tomorrow.

After the surgery, the doctor came to speak with me while Ben was in recovery.  He said that the mass was much larger than they saw on the CT scan or what they could feel.  It was 2 inches in diameter.  He said we'd have results on Monday and we could just call his office.  That's where the conversation should've ended, but instead I thought I'd be the "good" wife who asks lots of questions.  So I asked, "from what you saw, what is your opinion?"  To which he sighed and said, "well, honestly, it was concerning the way it looked.  After you've been doing surgeries a long time, you kinda get a feeling".  (By the way, his doctor is 70+ years old!  Isn't that just crazy?!?!)  Then he followed up his statement with a quick, "but I still give it a 50/50 chance for lymphoma/cancer or benign."  Oy.

Sometimes being clueless is just better, I think.  Although leading up to his surgery I felt complete peace, in that moment, I totally lost it.  I just can't even imagine hearing that it is not benign.  I began to fear, and to doubt.  To not trust Jesus with my husband.

And then I prayed for peace.  And God listened (he does that, you know).  I feel at peace with the whole situation.  Worrying or stressing about it in any way isn't going to make the prognosis any different or make tomorrow more cheerful.  But it will rob today of any peace and joy that it may hold.  I may completely miss out on today if I'm always worrying about tomorrow.  And so I choose to live in today, enjoying it fully, and to trust that God has tomorrow under control.  He knows what's going on with Ben's body, and He has a good plan for Ben and our family.  Good plans and easy plans aren't the same, though.  Sometimes life is hard or challenging.  It doesn't make it any less beautiful or precious.

I know that there are many, many of you who have been praying for us-for health for Ben, for peace for us both, and for a "benign" test result.  I truly appreciate each and every one of you praying.  Please continue to pray for us...and especially for Ben as he calls the doctor tomorrow to hear the preliminary results...I want to barf a little just thinking about making such a call.

I will certainly update with the assumed good news tomorrow :)
Posted by Mothering with Creativity at 3:51 PM