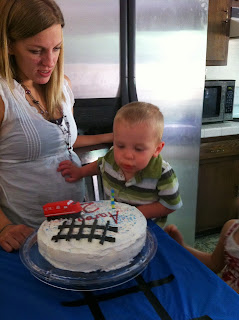 My little guy turned 2 yesterday.  He is such a sweet little boy!  He recently fell in love with trains, and so we had a train themed party for him.  As always, I aim to keep my kids' parties at about $100 total.  I'll show you what I did for this party so you, too, can find ways to keep your party budget down!

We had our party at 3:00.  This is the perfect time because A) it's after nap time for little ones and B) it's after lunch and before dinner so snacks are sufficient (which is cheaper than a whole meal). 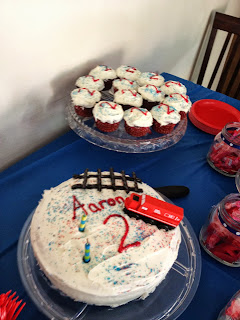 Since Ben was gone all morning at a class, I kept this party a little more simple than some I've had in the past.  I stuck with a box cake and a tub of icing (I know, totally not the typical me, but I was so glad I did this for this particular day).  We had a white cake, and chocolate cupcakes, both with vanilla icing, blue/red sprinkles, and a tube of glittery food gel to write Aaron's name and the number 2.  Licorice strings made up train tracks, and a train from Aaron's train set was the top decoration. 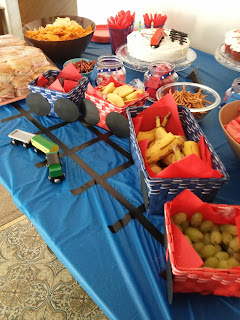 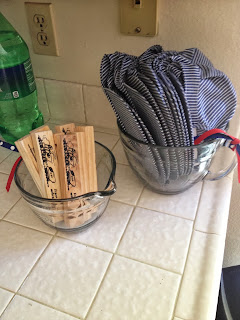 I bought whistles and conductor hats from Amazon.  They ended up being Oriental Trading products, but they were cheaper for whatever reason on Amazon (plus we have Amazon Prime, so we got free shipping).  This was the most I've ever spent on party favor type products, but I didn't do a piñata or anything else like that, so I went for it.  It was a little less than $20 total.  Note: prices often fluctuate on Amazon!  Unfortunately, these were cheaper just 2 days before I actually bought them :( 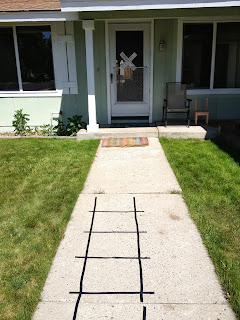 I used electrical tape to create train tracks on the front walkway, and foam board to create a "Aaron's birthday" train crossing sign on the door (totally forgot to take a close-up of it). 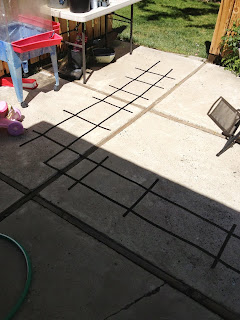 I also created train tracks on the back patio.  Here's my word of wisdom using electrical tape outside.  The tape in the backyard, which happened to mostly be in the shade, did great.  The tape in the front, however, which is completely in the sun, kept coming undone and wrinkling up from the heat.  If you are going to do electrical tape outside, I suggest finding places with some shade. 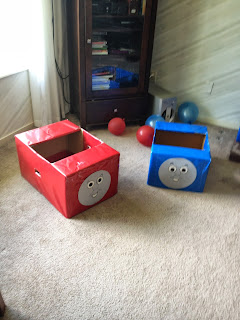 Some old boxes, wrapping paper, and grey, white, and black scrapbook paper created these trains for the kids to ride along in.  I cut holes in the sides for handles, as my little guy otherwise couldn't hold the box up well enough to run around. 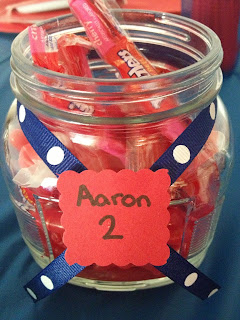 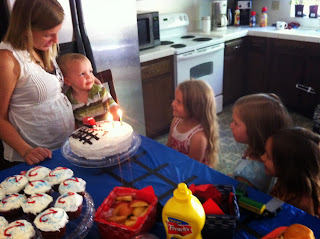 Here's the birthday boy just before we started to sing to him!  And, he was a pro at blowing out the candles!  See my big belly? ;)

For food, we made little sandwiches out of bread rolls, turkey, ham, and cheese.  The fruit train had green grapes, red grapes, cut apples, halved bananas, and cut watermelon.  I bought 2 bags of chips and a bag of pretzel sticks. I dipped the pretzel sticks in red dipping candy and a dash of blue sprinkles (again, I forgot a picture, but they are a similar idea to my ladybug pretzels).  For drinks I bought two 2 liter sodas and some carpi suns.

I did all my shopping at Walmart and the Dollar Store, with the exception of Amazon for the favors and scrapbook paper on sale at JoAnn's Craft Store.  I came out right at about $100 in total.  Plus, we had sandwiches leftover, so we'll eat those for lunch today, as well as leftover pretzels, sodas, apples, and capri suns.  We also have leftover wrapping paper from the train boxes, so I can use that for other gifts in the future!

You can see the details to the ladybug birthday here, and my orange/blue boy birthday here.
Posted by Mothering with Creativity at 8:03 AM